It’s the day Australians dress up.

I mean r-e-a-l-l-y dress up. Hats , high heels, designer frocks, Top hats and tails – and everything in between.

This is Melbourne Cup.

The first Tuesday in November.

A public holiday in Melbourne CBD.

Is anybody at work? 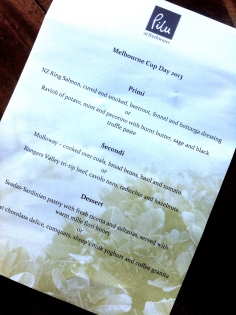 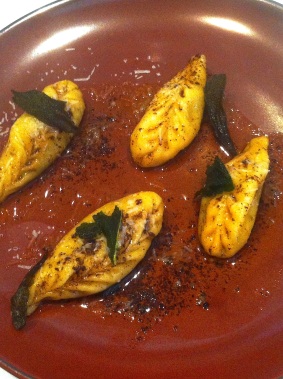 Glenys my painting friend from NZ was to be in Sydney on this day and wanted to know what we’d be doing.

Well I did have an invite to celebrate Melbourne Cup at Pilu Restaurant in Freshwater, and did know they’re an award winning restaurant, with food to die for from Its Sardinian owner chef.

The race is never run before 3pm so there is a lot of time beforehand to dine and wine.

Atsuko, Jan and I all decided to make it our place to celebrate.

I actually wore a skirt and heels!  Jan and Atsuko wore the most gorgeous hats and Glenys and I chose ‘Fascinators’ We looked knockout. No, really we did.

The place was full when we arrived and the first hat we saw was a full Indian headdress in white feathers. Wow.

Funnily it did win the best hat later? Ot it’s owner did! My little red flower never stood a chance. 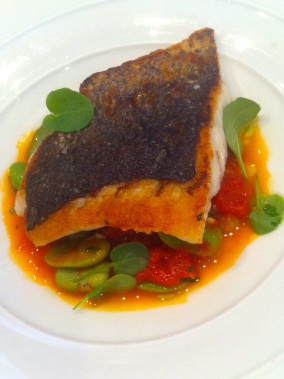 Somehow we scored the best table in the house!

Slightly away from the bigger tables of champagne drinking ladies and in a area of it’s own, with the big screen just above the wine cabinet.

We started with a drink, me with my favourite lemon Lime and Bitters. The waiters were a lot of fun and we were having heaps of laughs.

Our Primi course from the set menu appeared. The most flavoursome Ravioli of potato, mint and pecorino with burnt butter, sage and black truffle. OMG. It was a flavour sensation.

A fashion parade took place with local Mums as models and they were so friendly, turning and twirling round every table and explaining to us what they were wearing.

We did see a fabulous hat and outfit in hot pink passing by and we all commented on it, only to discover she wasn’t in the parade, she was on her way to the loo. Oops.

Soon our Secondi arrived, and I’d chosen Mulloway – cooked over coals, broad beans, basil and tomato. We all wanted every mouthful to last as long as possible.

Much conversation and chatting took place and not one sketch actually happened.

We did have our sketch gear, but felt we didn’t want to be anti-social.

Dessert then was placed in front of us. I was the black sheep and chose Amedei Chocolate delice, cumquats, sheep’s milk yoghurt and coffee granita.

You should know that Amedei chocolate is a world famous family run company near Pisa in Tuscany, where we’ll be next September.  Would love to visit – now there’s a thought.

That’s one of their sketches above.

The other 3 girls had Sedas-Sardinian pastry with fresh ricotta and sultanas, served with warm mille fiori honey!

Well it was definitely time to eat tiny spoonfuls and savour each one. Being generous we did taste the other dishes though. Just a teeny taste.

The race began. Everyone was well fuelled on champagne and the noise level was way up there.

We know this because we had the entire restaurant standing behind us to watch the race, while we sat decorously at our table and watched ‘our TV’ . But we are wonderfully kind and generous people and we allowed them to share.

There was a sweep and all had a few horse name clutched in our paws hoping to see a sign of them up there. on the screen.

My 2 never really had a chance with all those other annoying horses pushing in front!

Anyway, Jan and Atsuko both got a payout for a place, and one punter scored $300 and it was her birthday.

After the race is over most of us decide to make our way out into the afternoon sun and breeze, go home have a cuppa tea and recover from the excitement.

See you here next year!

If you're a sketching student past or present join the group! The perfect place to view and share work - sketches, ideas, ask questions, even suggest a meet up.